South of the border is a crass, brash, crude, cruel, snarling, heartless, stupid, mean, linguistically challenged bigot, racist and misogynist. His counterpart north of the border is all smiles and warmth, projects compassion and love, is eloquent and the face of fun and good cheer, can pass the strictest of political correctness tests, calls himself a feminist and reminds us at every chance how much he welcomes refugees, Muslims, immigrants and diversity. And why wouldn’t he be smiling? Trump is the antichrist that lets him play knight in shining armour in Canada and the world.

The most recent example is his much-loved and much-shared Twitter response to Trump’s sweeping entry ban of nationals from seven Muslim-majority countries: 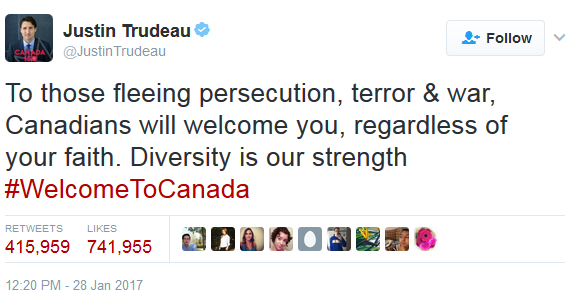 Righto. Tell that to the Syrian and Iraqi refugees who are turned away from Canada because just three days before this tweet the government quietly ended the policy allowing groups of five and community sponsors.

Tell that to the Yemenis banned by Trump who are “fleeing persecution, terror & war” in Yemen thanks to Saudis driving Canadian-manufactured light armoured vehicles – an arms deal that Harper made with Saudi Arabia that Trudeau signed at the beginning of his term.

Oh yeah, and tell that to Maher Arar, a Canadian-Syrian dual national detained by the US in 2001, deported to Syria on suspicion of Al Qaeda links, tortured, and later found innocent. Canada’s RCMP, under a Liberal government, stood by (with information) and did nothing.

…while confirming that no one is currently stranded in Canadian airports due to the US entry ban, which means he is talking to literally no one.

It’s not just because they are opposites that Trudeau is thanking his lucky stars for how good this all makes him look, either. A Trump presidency has just approved a problematic pipeline that Trudeau has long supported that might win him a few political points in tarsands heartland and hitherto Conservative-dominated Alberta. All the while, mind, polishing Canada’s climate action turd to show off on the world stage under the banner ‘climate leader’.

Trudeau is the darling of international media in a way that would not have been possible next to a more charismatic leader like Obama.